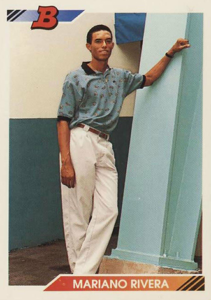 DRAWING FOR TWO GRADED
ROOKIES FROM 1992 BOWMAN
BGS 9 MARIANO RIVERA
BGS 9 MIKE PIAZZA
TOP TWO NAMES IN THE RANDOM HELD @ END
THE BREAK EACH WIN ONE CARD!
1 ENTRY PER SPOT YOU HAVE IN THE BREAK!

1992 BOWMAN THROWBACK BOX BREAK!
HOBBY BOX
CERTIFIED BY THE BASEBALL CARD EXCHANGE
NOT TAMPERED WITH PER THE CERTIFICATION
SCROLL DOWN TO SEE PRODUCT DESCRIPTION 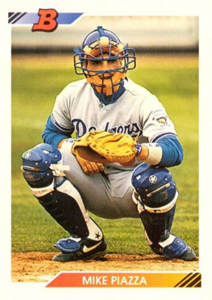 Since its return in 1989, rookie cards have been the focus of the Bowman brand. However, it wasn’t until 1992 Bowman Baseball where it really took off. With a clean design, crisper card stock and a somewhat limited print run (at least by 1992 standards), it has become a classic of the hobby’s Junk Wax Era. Several key rookie cards certainly don’t hurt the cause for 1992 Bowman Baseball either.

1992 Bowman Baseball has a clean, white-bordered design. The small bar with the Bowman “B” is simple but has helped make the set instantly recognizable among collectors. Many of the prospects in 1992 Bowman Baseball are pictured in street clothes that were fashionable at the time. This gives the set some added charm, much like flipping back through an old high school yearbook.

The checklist is led by a pair of soon-to-be Hall of Famers: Mike Piazza and Mariano Rivera. For Piazza, it’s one of only two rookie cards. Throughout his career, the catcher was one of the hobby’s most popular players and his 1992 Bowman Baseball is one of his most recognizable cards.

Mariano Rivera didn’t have the same hobby ascension that Piazza had. It was late in the closer’s career that collectors finally realized just how dominant the Yankees fixture was. Part of that also had to do with the fact that relievers have always been largely overlooked in the hobby.

But it’s not only the first-year cards that move well. A handful of second-year cards consistently sell for just as much, if not more, than the overly plentiful 1991 rookie cards. Pedro Martinez, Jim Thome and Chipper Jones all fall into this category.